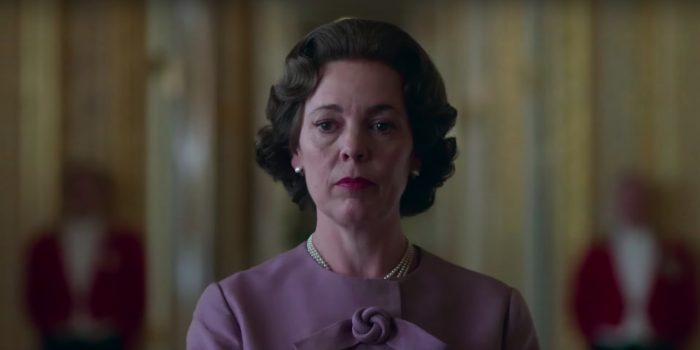 Heavy is the head that wears the crown, but heavier still is the burden on the actor that has to follow up Claire Foy’s Emmy Award-winning performance as Queen Elizabeth II in Netflix’s acclaimed royal drama The Crown. But if anyone is up to it, it’s Oscar winner Olivia Colman. The actress steps into the sash and fitted dresses of the royal monarch in season 3 of The Crown, which recasts its entire award-winning ensemble with older actors. It’s a choice that would raise any eyebrows, but Netflix’s The Crown season 3 trailer addresses that in a very meta way.

“A great many changes. Nothing one can do about it. One just has to get on with it.”

So declares Colman’s Elizabeth II as she observes the new postage stamp featuring her profile as a “settled sovereign,” aka “older.” But change is inevitable, and that’s something that’s coming in spades for The Crown season 3, which covers “the Wilson era” from the 1964 through 1976. It’s a time of rapid upheaval, as the monarchy navigates changes in technology and cultural anxieties, along with the looming specter of nuclear devastation.

Creator Peter Morgan and the rest of The Crown team made the unexpected decision to recast the entire ensemble with season 3 rather than age up the award-winning cast with make-up. Morgan defended his decision to Variety back when the announcements were first made. “You can’t ask someone to act middle-aged,” he said. “Someone has to bring their own fatigue to it. The feelings we all have as 50-year-olds are different than the feelings we all have as 30-year-olds. That informs everything we do.”

In the short teasers for season 3 so far, Colman has already proven to be a stupendous choice, even imitating Foy’s clipped speech in this most recent teaser trailer. She’s no stranger to playing royals either, having recently won an Oscar for her portrayal of Queen Anne in last year’s wickedly sharp The Favourite.

In addition to Colman, The Terror’s Tobias Menzies will take over the role of Prince Philip, previously played by Matt Smith; Helena Bonham Carter steps into Vanessa Kirby‘s shoes as Princess Margaret, and Ben Daniels will play Antony Armstrong-Jones, aka Lord Snowdon, a part originated by Matthew Goode in season 2. Camilla Parker Bowles, the current wife of Prince Charles, will be introduced as a character this season, as will Charles’ first wife, the late Princess Diana.

Nobody in their right mind sets off to do a movie with 25 main characters: Behind the Scenes of the Downton Abbey Movie