Netflix’s Oscar season clout exploded in early 2019, when the streaming platform scored its first Best Picture nomination for “Roma,” but the company actually won its first Oscar two years earlier. When “The White Helmets,” Orlando von Einsiedel’s harrowing portrait of bomb relief activists in Syria, won Best Documentary Short Subject, it marked a turning point for the company. For the filmmaker, however, it was a different story.

“The win was immensely flattering, but I don’t know if it led to loads of offers,” Einsiedel said in a recent interview. Instead, the 39-year-old British filmmaker found that he gained far more currency when his 2015 feature “Virunga,” about the plight of Congolese park rangers fending off poachers, scored a Best Documentary nomination (it was Netflix’s second, after “The Square,” Jehane Noujaim’s doc about the pro-democracy movement in Egypt). “I went from a very unknown filmmaker to a little better known,” he said. “That was a big shift.”

A former snowboarder who found his niche in riveting social issue documentaries, Einsiedel is no longer on the margins of his field, but the kinds of stories he tells mandate a never-ending hustle. That’s part of the reason why his latest project, a series of short documentaries commissioned by the Nobel Prize, forced him to find a new home for his work at National Geographic Films.

“A lot of people saw ‘White Helmets’ and said, ‘Well, Netflix buys shorts, that’s great, let’s sell to Netflix,” he said. “So now they’ve got like 10 or 15 short films on their slate.”

By contrast, Einsiedel’s new work, “Lost and Found,” marks one of only two short films in National Geographic’s fall slate, its first foray into the format. As with his previous efforts, “Lost and Found” involves an activist driven to fight back against a daunting humanitarian crisis. The story focuses on Kamal Hussein, a Rohingya refugee who works at the world’s largest refugee camp on the border between Myanmar and Bangladesh helping scattered families find their missing relatives. It’s one of five shorts the filmmaker has shot for the Nobel Prize that will be released in the coming months, but “Lost and Found” has been bundled with Alexander A. Mora’s “The Nightcrawlers” — a shocking look at vigilantes in the Philippines — for an awards-qualifying theatrical run.

The opportunity to work with the Nobel Prize came to Einsiedel through producer Dan Lin, whose credits include “The Lego Movie.” Oddly enough, the new opportunity was a similar approach to packaging an established brand through authentic emotional storytelling. “The Nobel Prize wanted to reach a different audience,” Einsiedel said. “They wanted to make a number of films about the legacy of people who had won the Nobel Peace Prize in the past. It opened up this amazing canvas of potential stories.” With “Lost and Found,” the starting point was the UN Refugee Agency, a two-time Nobel winner; future installments take a similar approach to finding contemporary stories based off previous wins. And for Einsiedel, it allows him to transform a work-for-hire gig into a more substantial challenge.

“Frankly, this is kind of the way I work anyway,” he said. “My starting point is if it’s going to be a difficult issue, what’s the story that cuts through the politics and has hope in it?” He got to that point through trial and error. In 2017, Einsiedel’s U.K.-based Grain Media produced another documentary about the Rohingya refugee crisis, “The Rohingya: Silent Abuse,” and it fell short of expectations. “It was a very sort of hard political film, kind of investigative, and it dealt with all the evidence of war crimes — and no one watched it,” Einsiedel said. “I found that when you do films where at least there’s a thread of hope in there, the potential is just so much larger. Networks love that, and they’re really willing to give them large platforms.”

Einsiedel first began cultivating his approach to mining personal stories from the backdrop of global concerns with his viral short “Skateistan: To Live and Skate Kabul,” about a skateboarding school in Afghanistan. “All I get when I read about Afghanistan or Middle East are terrible stories,” he said. When he read about the school, “a lightbulb went off in my head,” he said. “It was all about the war, and yet the heart of the story was these kids who could forget about the war. I thought, maybe I’m not the only one who wants to hear about other things going on.”

That multidimensional approach — using character studies to explore weighty international issues — not only suited the Nobel assignment; it synced up with National Geographic’s evolving strategy for its documentary unit. One year after the company’s Oscar win for the rock-climbing thriller “Free Solo,” NatGeo has shifted into supporting documentaries that deal with more consequential issues, including the Syrian hospital portrait “The Cave,” which premiered this fall at TIFF; “Lost and Found” went to Telluride.

“These documentaries are all giving voice to the voiceless,” said Ryan Harrington, NatGeo’s vice president of Documentary Films, during a panel at IFP Week this month. “With NatGeo’s history with photojournalism, we feel that we have a platform that is able to bring eyeballs to very important issues that aren’t being covered. We’re not a general entertainment company. We have the privilege of being a well-known brand that filters stories we should be telling.”

Einsiedel said he harbored no ill will toward his old colleagues at Netflix. “I released two films with them and those bonds go quite deep,” he said. “They’re killing it in terms of how they put their films out there and the partnerships that they build.”

Among the other Nobel-produced projects in Einsiedel’s slate is “Into the Fire,” another Telluride selection, which focuses on a team of Yazidi women who work on removing mines from around their town left after ISIS fled the region. “They booby-trapped everywhere to stop the Yazidis,” said Einsiedel, who spent two weeks in Iraq shooting the harrowing process of dismantling mines. “Every single bit of earth in that area could be a mine.” (In 1987, the Coalition to Ban Landmines won the Nobel Peace Prize.)

Other upcoming shorts in the project include a rehabilitation center in South Sudan, an orchestra inspired by the legacy of Nelson Mandela in South Africa, and a climate change saga involving a British scientist who attempts to reach the untouched summit of a mountain covered by greenery to study how forests grow when untouched by humans. For that last one, Einsiedel found himself scaling a cliff with his subject in an abandoned region and gripped by a sudden panic attack. 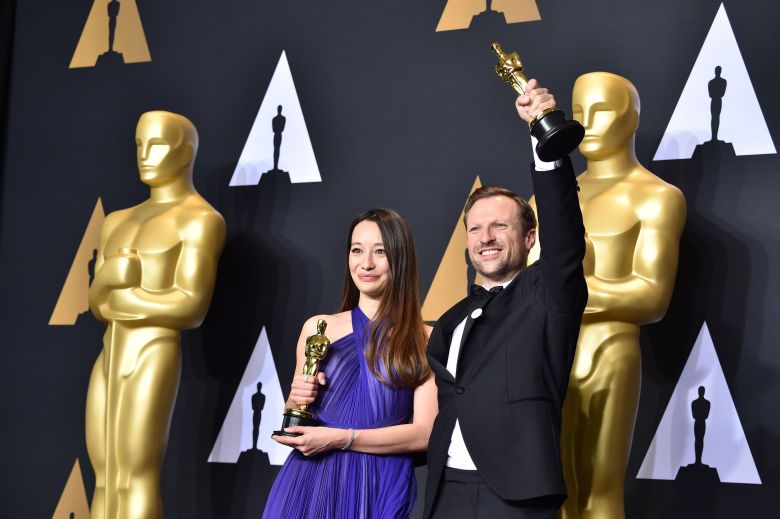 “These guys had been planning for years to climb this mountain and we got the go-ahead to do this about two weeks before,” he said. “I’ve never climbed before and I got halfway up and I ran out of energy. I’m hanging there and there’s no hospital for six hours driving and the sun is beating down and no one can hear me anymore. I had to have a word with myself. I had a camera in my bag. Eventually I found the strength to carry on.”

Einsiedel stressed that he didn’t just take on the Nobel project as a paycheck gig. “I pass on almost everything brought to me because it just doesn’t have the right DNA,” he said. “Maybe I’m a little fussy, but I know what gets me excited. I’ve got to read about the issues and the characters. They have to inspire me, and I have to care about them.” He realized that his particular interests weren’t always the most commercial, and acknowledged other documentary Oscar winners whose prolific output tended to reach wider audiences. “Look, if you talk to Alex Gibney or Davis Guggenheim, those guys seem to have access to all sorts of funding and maybe they find it very easy,” he said. “If it’s about sport, music, or celebrity, it’s slightly different. Those films will always attract funding because there’s a much clearer trajectory to making the money back. But it’s a much tougher environment for social issue films.”

Einsiedel said the rapid pace of production on shorter projects has been gratifying in contrast to his feature work. “It’s not a financially stable way to work, but it’s lovely to be able to do something relatively quickly,” he said. “You can find a story and shoot in a reasonable period of time and the edits don’t take long. ‘Virunga’ took a year to edit. With shorts, creatively it’s really satisfying because you can wrap it up.”

He isn’t facing a shortage of new opportunities. Upcoming short-form platform Quibi has hired him to develop a secretive non-fiction series, and he’s currently planning to shoot his first narrative feature, also under wraps. Einsiedel said that he and his longtime producer Joana Natasegara often joke about what sort of projects they could take on to make their jobs easier. “There’s only so many films you have in you in your lifetime, and they all take you about three years to make,” he said. “I’ve got to feel that fire in my belly. The film we make about risk you have to really believe in it.”

“Lost and Found” is currently screening at Metrograph in New York. It airs on National Geographic later this year.

[Review] ‘Polaroid’ is So Underdeveloped You’ll Want to Shake It